The former St. Wendelin High School in Fostoria started coming down Aug. 3 to make room for marketable real estate.  And while many hate to see the 112-year-old landmark go, WIN Waste Innovations, formerly known as Sunny Farms Landfill, is doing its part to make the land usable for redevelopment. 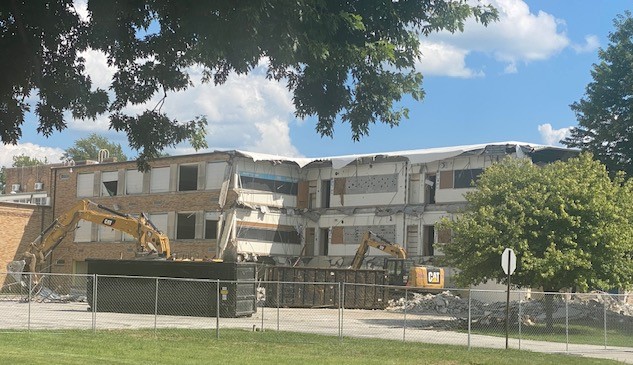 WIN Waste Innovations has agreed to waive the landfill’s tipping fees as the building was torn down and the debris brought to the facility. With an expected 1,000 tons of demolition debris, the arrangement will save the Community Improvement Corporation (CIC) of Fostoria an estimated $40,000.

CIC Board Chair Renee Smith, whose organization bought the school in June from St. Wendelin Parish and the Toledo Catholic Diocese, says the building had been vacant since it stopped serving students in 2017. In that time, structural issues developed that required its demolition, she says.

The 34,000-square-foot high school sat on a little more than eight acres, Smith says, adding that the CIC is conducting an analysis to understand the most suitable uses for the property.

“When we realized what needed to happen, we reached out to Sunny Farms because of its previous project with the St. Wendelin Elementary School,” she says.

In 2018, the company waived fees on an estimated 500 tons of construction and demolition materials and 2,000 tons of hardfill from the demolition of the former elementary school, saving the St. Wendelin Parish nearly $43,000.

“Last fall, we completed a mini park at Main and North streets,” she says, “and Sunny Farms was a financial contributor to that. They have been a wonderful partner in this project as well, and we certainly appreciate their support.”