Sunny Farms is making significant investments to enhance odor controls at the landfill. 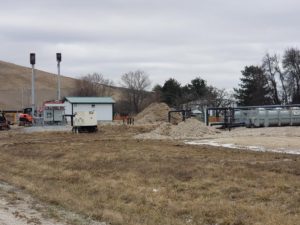 Sunny Farms Engineer Ed Brdicka said the project also should help with odor control by sealing gas within the landfills and allowing it to be more efficiently routed into the landfill’s gas collection system.

“This will improve gas collection at the site,” he said.

Meanwhile, two other projects currently underway include: expansion of the existing gas collection system and installation of a new hydrogen sulfide treatment system.

Gas is a natural byproduct of landfill materials as they age. Sunny Farms has placed a network of wells designed to efficiently collect the gas about 250 feet apart. The wells are connected by pipes, which route the collected gas to a flare, where it is harmlessly burned off.

Additionally, installation of a new hydrogen sulfide treatment system is currently underway and scheduled for completion in February 2019.

Sunny Farms began selection, design and procurement of the treatment system in September 2018. Initial components were delivered and installation began in December. Installation of this system is a major investment and is designed specifically to remove hydrogen sulfide gas at the landfill, which will allow the facility to more effectively control potential odors.

“All of these projects represent Sunny Farms’ commitment to managing a sophisticated operation safely, efficiently, and with the public in mind,” Brdicka said.